March 1986-December 1986
Military service as physician at the Greek Presidential Guard of Evzoni and Presidential Mansion.

December 1986-September 1987
Internal assistant as a soldier-physician at the 1st Internal Medicine Department of the Military Hospital in Athens, Greece (ΝΙΜΙΤΣ)

University of Illinois at Chicago

Aesthetic and reconstructive surgery of face and body Faculty of Medicine, National and Kapodistrian University of Athens and UIC, Division of Plastic Surgery 2003

Thesis was elaborated at the University of Illinois at Chicago, Division of Plastic, Reconstructive and Craniofacial Surgery, Professor: Dr Mimis Cohen, M.D, PhD, FACS, based upon cases treated in our division.

In 2003, thesis was announced at the Facaulty of Mediceine Division of Surgery, National and Kapodistrian University of Athens.

June 1996-Olympia: 15-hour course of microsurgery at the Experimental Lab of the School of Medicine, University of Ioannina. Training in microvascular anastomoses and microneural sutures.

University of Illinois at Chicago, USA: 40-hour course in microsurgery on microvascular anastomoses and nerve microsutures under microscope.

The on-going regular editorials and studies on a wide range of cosmetic surgery procedures and other topics published in national newspapers and medical magazines, appearances on local and national television and radio, coupled with annual presentations in international seminars confirm not only Dr Kapositas� passion for the results plastic surgery brings about but also his commitment to continuous professional development. 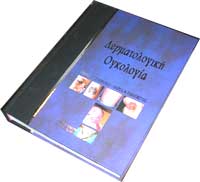 "The purpose of this work is to introduce contemporary knowledge to issues of clinical epidemiology, laboratory data as well as treatment of skin tumors.
Thus, it was designed right at the outset to include various sections of several specialties. Selected experts from several specialties successfully offered their knowledge and experience.

It is my belief that the book's rich material will contribute to its esteem by a broader specialized medical readership such as dermatologists, surgeons, oncologists and more.
The primary aim remains the development of those reflex actions that will determine the prompt and early diagnosis and the choice of the best treatment plan applicable to each case.

The above is of significant importance given that Skin Cancer is very common and its rising tendencies during the last decades are recorded on most geographical areas of our planet as well as in our country." (Book introduction by Nikolaos G. Stavrianeas)

Read at the 27th world congress of the International College of Surgeons, Sao Paolo, Brazil, 1990 More than 40 papers and posters have been announced in Greek conferences along with participations in conferences of the Greek Society of Plastic Surgeons, the Microsurgery Society, and the Greek Surgical Society and in many meetings and panels either as speaker or as participating member.

Since 1998 in private practice, we perform plastic surgery on patients residing both in Greece and abroad. The operations recorded up to the moment count more than 8000 cases.