The shape of the auricle, or pinna, of the ear begins in the intrauterine life of the child, and it projects from the baby’s face during the 3rd to 4th month of fetal life.

During this period, the anatomic features of the ear begin to develop (grooves-helices) to form the alar cartilage.

The cartilage forms the appearance of the ear. However, there are cases when the auricle is not normal, both in terms of appearance and position (in relation to the face).

The most common disorder is what we call ‘prominent ears’, aka ‘Dumbo ears’, where the auricles project from the patient’s head. 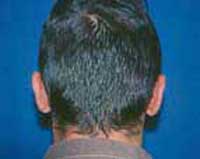 How do patients feel?

Younger children are bullied by their friends, especially when they go to school. Older patients lose their self-confidence towards the opposite sex, and some of them feel uncomfortable being around people. On the contrary, girls and women have a solution to their problem, i.e. long hair to cover their ears. Yet, it remains a problem during the summer, when they make a pony tail or swim in the sea.

What you must know about Otoplasty:

Otoplasty aims at bringing prominent ears back and close to the head or reducing the size of big ears or earlobes.
The procedure can be performed at the age of 4 years onwards.

Where does the procedure take place? - Types of anesthesia

The procedure is performed in private hospitals on an outpatient basis, i.e. the patient need not be hospitalized.

If your child is aged from 5 (preschool age) to 10-11 years old (school age), the surgery is conducted at the Athens Medical Center, under mild anesthesia. The child is discharged 2 hours after the surgery.
For older persons, we prefer local anesthesia combined with sedation.

Representation of the procedure 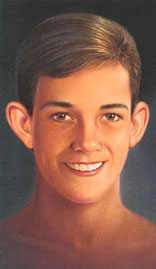 Ears appear to protrude too far from the head 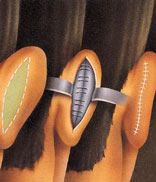 A small incision is performed on the back of the ear. The cartilage is folded. The incision is not visible.

Final image of the ears

Analysis of our technique

First, we remove a thin strip of skin from the back of the ear. Next, we scrap the front surface of the cartilage with a special curette to help it turn backwards. On specific points on the cartilage, we place special transparent, non-absorbable sutures to help the cartilage fold. In this way, the ear is suited closer to the head and the antihelix is formed. The skin behind the ear is closed with sutures and the final stage of the procedure is bandaging.

Watch the procedure on video.

After the procedure, the head is covered with a light bandage to stabilize the results of the surgery. It is removed 24 hours later. All patients can then wash their hair and resume their everyday activities.

The ears may be a bit swollen, which is normal. Yet, our experience demonstrates that all patients can go back to their social and professional activities.

A lot of patients choose to take a 2-3–day leave, while others choose to be operated on a Friday in order to recover during the weekend. Each and every patient is advised to avoid direct injury on the ears for 4 weeks. As per children, their teacher must be informed to keep an eye on them for a few days. 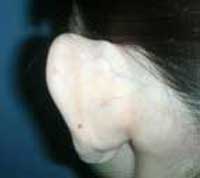 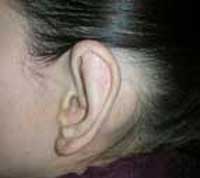 Apart from protruding ears, there is a wide spectrum of distorted auricles, such as cup ears, shell-like ears, lop ears (the top of the ear folds downwards), large earlobes, etc. 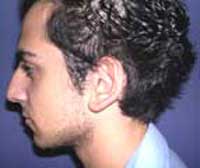 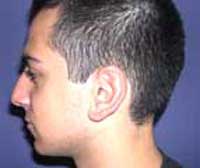 It refers to an ear disorder, i.e. the child is born with insufficiently developed ears.
On many occasions, it is accompanied by facial asymmetry (hemifacial microsomia).
The severity of the disorder varies from mild microtia to anotia (complete absence of the auricle).

Microtia has no identified causes. We do know however, that it occurs between the 7th and 8th week of gestation, and its incidence is 1 in 6,000-10,000 births with 2 to 1 boy to girl ratio.

Restoring microtia requires 2-3 stages. The procedure aims at forming a new auricle using the existing skin. In a different case, we transfer skin from another body part and obtain cartilage from the ribs.
We prefer to operate children aged 8-10 years, when their costal cartilages are mature.

During the first stage, we create a cartilage mold of the ear which is placed in the under construction area. Next, we perform some micro-corrective procedures to give the future auricle a natural-looking appearance.

Ear surgery treats a plethora of deformities, from prominent ears to microtia, and each case has its own particularities.

Otoplasty. Photos Before - after